On our way through Paris via Blaricum 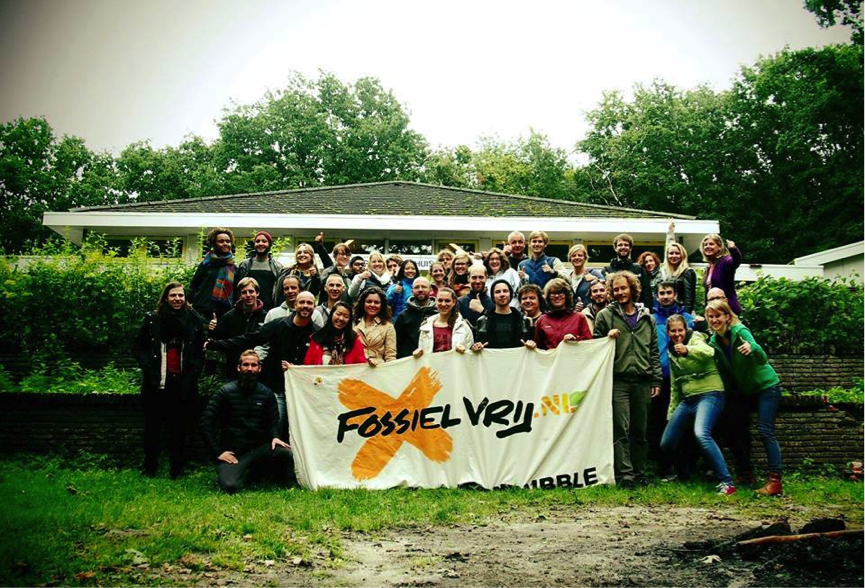 A couple of weeks ago I got invited to join the Fossielvrij Nederland training weekend. After having been active as a social media reporter for a while I thought it would be a good opportunity to actually meet the people, whose names I often see online, in real life. Luckily I already knew some people who are, just like me, volunteer at Greenpeace so I wouldn’t be a total stranger to everyone.

We arrived pretty late on Friday evening after a small breakdown in communication but we received a really warm welcome. We dug into a lovely meal and as you tend to do when you’re new, our little group of five stuck together. But that would soon change. After dinner we did this “mingling” thing (awkward) and a quiz. A pretty difficult one actually. How much do you know about Fossielvrij. I don’t exactly know what happened but in the end our team, Yael Karl and the Flexitarians, won!

After that it was time to do some more socializing but now the conversation had been lubricated by alcoholic beverages. I’ve talked to students, bookkeepers, activists, housewives and trainers. People that work at Greenpeace, Milieudefensie, DHL (or wait, that’s actually me. Well sometimes I talk to myself.) and even one of these pesky reporters from GeenStijl managed to sneak in. People from all walks of life. But everybody got along great. It being the first night every one paced themselves so we called it a pretty early night especially since I had to wake up early for the breakfast service.

The next morning after breakfast we did some energizers to get the juices flowin’. I always feel pretty silly doing them but hey, I don’t want to be a party pooper. Completely energized we had an open space thingy. For those that don’t know that concept: there are about six different spots where people who want to share something can hold court. Seeing that it was my first time I took the divestment 101 workshop (really interesting) and after that “How to handle annoying team members” which was even more interesting. ( Sorry Edwin) 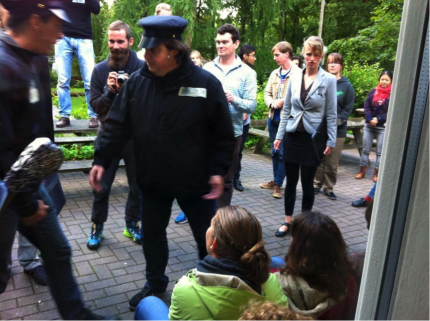 In the afternoon we had a really interesting simulation. How to do a proper protest? People had only 1,5 hrs. to prepare themselves which is pretty short so I guess they had a lot of stress. Why guessing you say? Because I had to play a part. The part of a cop being called into the situation. Nice to be on the wrong side of the law for once. This meant that I had a really relaxed preparation. I even managed to take a little nap. The protest itself was rather exciting and got the adrenalin going. Ignoring press officers (sorry Hielke), making demands and dragging people (sometimes even two at the same time) away. Great fun! 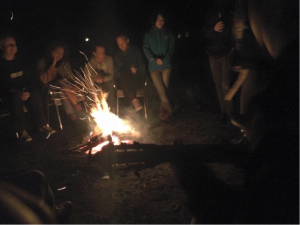 After debriefing and dinner it was about time to let our hair down. A campfire, a guitar and some drinks. We are after all a bunch of hippies, right? Interesting conversations followed and not all of them were on the subject of the environment. After everybody had a few too much to drink carnage ensued. I won’t go into details. Let’s just say: What happened in Blaricum, stays in Blaricum. If you want to witness one of these crazy you’d better sign up for the next weekend in October.
The next morning it took most people quite a while to wake up. I don’t know why. Luckily the weather had cleared up so we could go outside. After having been an unicorn (don’t ask) Suzy took us through some nice stretching exercises. Liset showed us the Road though Paris because this isn’t the end but only the beginning. A lot of exciting things are coming up. First of all the screening of the Naomi Klein movie, This Changes Everything,  the 26th of September at the NUON power plant in Amsterdam.

And the first weekend of October there will be another training weekend which will even be bigger and better. There will be people, not only from Fossielvrij, but from all different organizations. Activists, artists, students, politicians… Everybody can come. So all come and drag along one of your friends who’d normally not go to this sort of thing. If I’ve learned one thing this weekend that we accept everyone. Doesn’t matter what you do, where you come from, what you look like, young or old, male, female or whatever way you identify yourself. Everybody can help grow this movement in order to accomplish our ultimate goal: a better greener world!

All in all I had a great weekend and I will definitely be there the first weekend of October. You can sign up here and while you’re at it personally invite a friend as well. Hope to see all of you there.